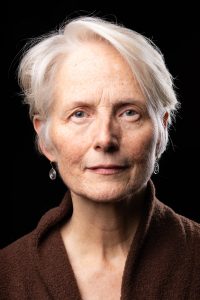 Kathryn Kirkpatrick, poet and literary scholar, is the author of seven collections of poetry, including Our Held Animal Breath (2012), which was selected by poet Chard DeNiord for the NC Poetry Society’s Brockman-Campbell Award.  She is also the editor of two collections of essays on Irish writers, Border Crossings: Irish Women Writers and National Identities (University of Alabama Press, 2000) and, with Borbála Faragó, Animals in Irish Literature and Culture (Palgrave, 2015)

Kirkpatrick holds a Ph.D. in Interdisciplinary Studies from Emory University, where she received an Academy of American Poets poetry prize.  Born in Columbia, South Carolina, she was raised in the  nomadic subculture of the U.S. military, and grew up in the Phillipines, Texas, Germany, and the Carolinas.  Today she lives with her husband, Joseph Conrad scholar William Atkinson, in the Blue Ridge Mountains of North Carolina, where she is a Professor in the English Department at Appalachian State University. She teaches classes in Literature and the Environment, Poetry and Poetics, Animals and Literature, and Irish Literature and Culture. In 2016-17 she helped found, with other faculty, an Animal Studies minor at ASU.

Among her honors are the Brockman-Campbell award for The Body’s Horizon (Signal Books,1996), selected by Alicia Ostriker; the Roanoke-Chowan Poetry Prize given to Beyond Reason (Pecan Grove Press, 2004) by the North Carolina Literary and Historical Association; and artist residencies at Norton Island and the Tyrone Guthrie Centre in Ireland.  Out of the Garden (Mayapple Press, 2007) was a finalist for the Southern Independent Booksellers Association poetry award.

Kirkpatrick is also the author of two chapbooks, Looking for Ceilidh (Mill Springs Press, 2004) and The Master’s Wife (2004).  As a literary scholar, she has produced editions of the Irish and Scots novels Belinda, Castle Rackrent, Marriage, and The Wild Irish Girl for Oxford University Press’ World’s Classics Series.  Scholarly essays on class trauma and eco-feminist poetics in the work of Dublin poet Paula Meehnan appear in An Sionnach, Out of the Earth: Eco-critical Readings of Irish Texts (ed. Christine Cusick, U of Cork Press), and New Hibernia Review. A vegan since 2009, her essay, “Vegans in Locavore Literature,” recently appeared in Through a Vegan Studies Lens: Textual Ethics and Lived Activism (ed. Laura Wright, U of Nevada Press, 2019).

In spring 2014, her collection of poems focusing on Irish subjects, Her Small Hands Were Not Beautiful, was published by Clemson University Press and received the NC Poetry Society’s Brockman-Campbell award. Her new and selected poems, The Fisher Queen, was published by Salmon Press in 2019 and was awarded the Roanoke-Chowan Award for Poetry from the North Carolina Literary and Historical Society. Currently, she is completing a monograph, Enraptured Space: Gender, Class, and Ecology in the Work of Paula Meehan, for West Virginia University Press. She is also at work on a new poetry collection about human-animal bonds, Creature.

The Roanoke-Chowan Award for Poetry, 2019